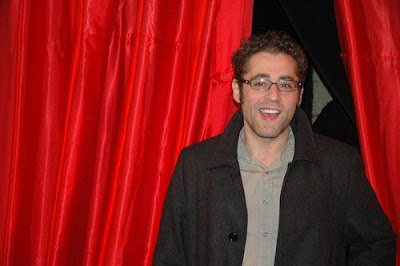 This is me entering the Theatre Centre Party (thanks Becky Johnson for this fun pic!)

Some of you may have seen me at the Theatre Centre Party doing a small little bit from the play. It was only a short little piece, and although I was SUPER nervous, I think it ended up going fairly well, and people felt excited to hear more. I sang a short excerpt from one of the wonderful songs by Andrew.

WHAT A FANTASTIC PARTY.

It is a real honour to be the next big show for The Theatre Centre.

WE HAVE BEGUN SOME CHOIR REHEARSALS!

I wanted to take some video, and maybe I will, but I don't want to freak anybody out! I will DEFINITELY try to take some photos though so I can post them on here. I couldn't stay for the entire last rehearsal but from what I heard it was AMAZING! We had about 9 people there who are going to be singing in the choir, and MORE ARE COMING! Its been such a fantastic response. People are SUPER EXCITED to be in the choir, and everyone loves the music.

OH! THE POSTER IS COMING SOOOOOOOON.

And one last thing. I thought this was hilarious. A few years ago I was in a Bruce Willis movie called LUCKY NUMBER SLEVIN and I found this picture online when I was googling myself. Hilarious, don't you think?

Posted by SummerWorks at 3:53 AM