Performance TWO, Are You Brave Enough?

Tonight's show was quite wonderful. I started off feeling a bit shaky at the start, but the spirit of Judith pulled me through. We had our second straight standing ovation, and once the show ended, people literally came right up on to the stage to speak to us, and the juice and cookies were really great to have. People stuck around for a long time tonight!

OH YAH. WE HAVE JUICE AND COOKIES AFTER EACH SHOW!

There was a lot of love in the tent, a lot of smiles, and some more tears ... and yes, a few more hoots and hollers.

Tonight's performance was pretty different, mostly because we went from a 100 seat audience to 30, which was pretty fascinating. Still a great, great experience, but it felt quite different. Still, it was amazing to look out and see people swaying and smiling and laughing and just making some noise.

We had two, count em, TWO tent crashers tonight. Two of the lovely residents from CAMH decided to join the show. One came in, sat down, stayed for a while, got up, did a bow and said a prayer to herself before calmly leaving the tent. The second stood in the aisle for a while, watching the show, and then, he also left respectfully. We're hoping to get a LOT more crashers over the course of the run.

WE WANT EVERYONE TO COME AND BE HEALED!!!

The response has been pretty amazing to the show. People are responding and reacting. We had one person walk out today and I'm pretty sure we've upset at least one or two people out there ... or, at least, we hope so! Healing is NOT an easy thing.

And so the question I wonder is: Are You Brave Enough To Be Healed By Judith Snow? 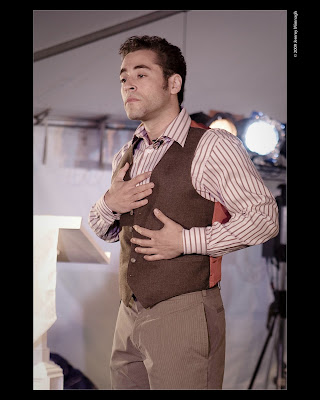 xoMichael
Posted by SummerWorks at 4:00 AM